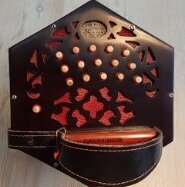 Thanks Stephen and Alex for pointing that out - it's a very important exception, and very relevant for small workshops.   That sale never happened so I've no dog in this fight, but to clarif

I must say, in respect only of Ireland/ROI to the Uk, there is some distinctly confusing advice regarding "export" because of their "special relationship" with the North, wherein they seem to be shari

Don , I  understand  and  have  used  the  Harmonized  codes  relating to  the instruments  I  have  exported  to  the USA  but  what  bothers  me  about the  current  changes  to  the  UK  situa