Concertinas and other instruments - which are the dream partners?

For me, concertina and fiddle blend so seamlessly. They both reinforce each other and make something that is greater than the sum of their parts. That’s my favorite.   But I am also very hap

Simon, here's my group's arrangement of Carolan's Planxty Irwin. As you'll hear, the bass is used sparingly, the rhythm guitar is not obtrusive, and the fiddle and concertina just sing! Fiddle plays i 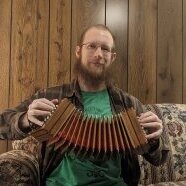 I really like mandolin with concertina for some tunes. Its percussive attack and rapid decay is a nice addition to the concertina's more steady sound.