38k Jeffries but a Wheatstone Layout 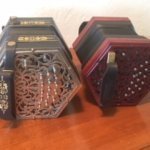 By Jewish Leprechaun
May 4, 2022 in Concertina History