Liberty Bellows (Philadelphia, USA) is starting up a series of basic tutorials for beginners 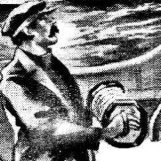 By TapTheForwardAssist,
February 28, 2021 in Teaching and Learning