Wayfaring Stranger, as learned from a Cornish Hobo 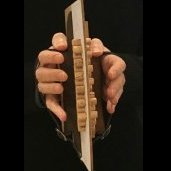