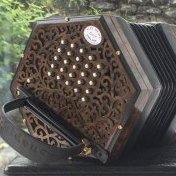 30 years ago, I measured reed resonances (not harmonics ) produced by sympathetic vibration to the sound a variable audio oscillator produced.  All the reeds I tested produced very similar results.  I

Or (more likely, I would think), one of the reeds is a little out-of-tune.