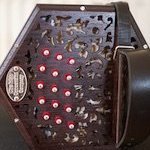 By Susanne
January 5, 2013 in Teaching and Learning